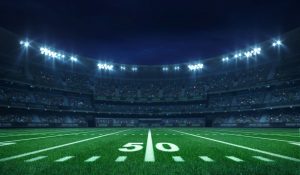 When Los Angeles hosted the very first NFL championship back in 1967, the game didn’t even sell out—more than a third of the seats at Memorial Stadium remained empty! Since then, it’s become one of the greatest sporting spectacles in the world, with 150 million viewers from 170 countries tuning in and thousands upon thousands of fans flocking to the host city.

The Big Game finally returns to Los Angeles on February 13, 2022, and there’s no doubt that SoFi Stadium will be filled to capacity, and so will the region’s airports and FBOs. Even on an average day, the airspace of Southern California ranks among the busiest in the world. The influx of fans flying in for Super Sunday—plus additional aircraft used by media and law enforcement—will make the region’s skies even more crowded. The championship game is forecast to draw as many as 150,000 out-of-town visitors, including many who arrive by private, corporate, or charter aircraft.

Each year, the Big Game creates one of the busiest weekends in private aviation—sometimes even resulting in air-traffic jams. Typically, 1,000–2,000 private and charter aircraft fly in just for the event and related activities. This increase in traffic can lead to super-sized challenges: restricted aircraft parking, aircraft repositioning, diversions to other airports, higher costs, and long wait times since everyone wants to depart at once.

Wide Open for Touchdowns for the 2022 Big Game

Luxivair SBD has developed a winning game plan to help fans flying in for the NFL championship game to bypass the crowds in Los Angeles. By landing directly at the FBO, flights can ease into Southern California’s notoriously crowded airspace, avoid the congestion and high costs of other area airports, and kick off a super experience in style.

Luxivair SBD is well-situated to Los Angeles and offers customers an uncrowded travel experience, unparalleled elegance, and a highly attentive staff who can assist with any pre-game preparations like luxury ground transportation or helicopter reservations. Corporate customers, charters, and general aviation pilots looking for easy access to all that Super Sunday offers are invited to contact Luxivair SBD—we’re happy to assist with plans to kick-off your Game Day festivities.