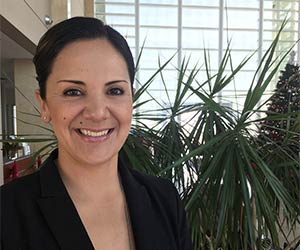 When she was a young girl, Nelly Cortez watched flights from a nearby airport passing over her family’s backyard in El Monte and wondered what it would feel like to be inside one. “Some day,” she told herself, “I’m going to learn how to fly an airplane.”

Though childhood dreams often take the backseat to more pressing realities in adulthood, Cortez is living hers, proving that the sky’s the limit when passion and perseverance are combined. Her commitment and determination shine through an impressive list of achievements as well as in her work each day as a customer service associate at Luxivair SBD.

After graduating from high school, Cortez first pursued a different passion altogether. Following in the footsteps of four generations of her family, she began her professional career as a musician. As the bass player and vocalist with Tres Ellas, a mariachi band she co-founded, Cortez played at venues across the world, recorded with Lady Gaga and other artists, and along with her bandmates, was nominated in 2012 for a Latin Grammy award.

But the skies still beckoned, so Cortez began flying lessons and decided to go back to school. After becoming a licensed private pilot and earning a B.S. in Aviation Administration from California State University, Los Angeles, she joined the team at Luxivair in September 2015.

Her diverse background and substantial training help Cortez ensure that Luxivair SBD meets all aviation needs and exceeds the expectations of the customers who rely on the private terminal—from business aviation pilots to charter passengers or medical flights.

Recently, Cortez returned to school to undertake additional aviation training. After completing 200 hours of ground school instruction at Mount San Antonio College in Walnut, then passing an exam administered by the FAA, she earned an Aircraft Dispatcher Certificate.

“Basically, this certification allows me to act as a pilot on the ground,” says Cortez. As a dispatcher, she would share responsibility with pilots for the operational control of flights, with duties that would include monitoring weather conditions, making fuel calculations, evaluating other safety factors, and preparing flight plans for pilots to sign off on.

Cortez sees her certification as not only a stepping-stone that will allow her to reach her career goal of working as a dispatcher for a commercial airline or in airport operations, but also as a benefit to her current customers at Luxivair SBD. “Having a well-rounded background in all aspects of aviation means there’s someone here at who knows what our customers are talking about, whether from a pilot’s perspective or a dispatcher’s perspective.”

Wendy Bechtel, Luxivair SBD’s manager, agrees. “Team members like Nelly are the reason we are able to deliver an exceptional experience to our customers. We fully support their education and professional development and want to provide them with ample opportunities to pursue their goals.”